Sky Ferreira is to the mainstream music industry what Daenerys Targaryen is to Westeros on HBO’s Game Of Thrones. Daenerys and Sky traverse the borders, storming castles and gathering powerful momentum expanding their armies of true believers. Sky’s dragons are her songs. You can see the fire in her eyes and hear it crackle on every chorus.

It’s been about one year since I first encountered Ms. Ferreira in an article on the Fall 2012 CMJ music festival in New York City. Who was this black leather biker jacket blonde scowling out from under the stage lights? She projected the rare kind of vibes our culture used to associate with Movie Stars. It used to mean something better than it does today to be called a Movie Star, long before the media circus dimmed the celestial luster.

The 2012 EP Ghost bewitched me like a zealous new convert to a cult religion. I wasn’t the only one. Positive buzz has been snowballing for Ferreira all year. Earlier in the Spring the title for her debut album was said to be I’m Not Alright. Months later it was reported as I Will. The days have mellowed into Fall and tonight is the album release party for Night Time, My Time. The concert was originally booked for the end of September, but rescheduled for a month later to line up with the album date.

One of the best parts of going out is the cab ride. You should be going very fast with the window down. You won’t be pulled over for speeding in a cab. If the driver isn’t zipping through yellows and hurtling past traffic then you’re being ripped off. Take the highway to go faster. My headphones oozed mirror-ball tremolos over snare-snapping beats, beckoning me into the electrified darkness.

Earlier in the day news had broke that the legendary Lord Lou Reed had passed on. Reed was so sharp and granite-hard as if to be immortal, like the Greco-Roman Gods rocking on Olympus. Part of me wanted to sit in dim candlelight playing White Light, White Heat on repeat for hours. My fingers were crossed that Sky might play a Lou Reed cover.

The boiling red and blue neon lights of the El Rey sign hovered above down the boulevard. When you look up past the palm trees and commercial structures the night sky is a solid, even shade of pale steel gray. You don’t see any bumps or wisps of cloud textures. There are no open pockets as far as you can see in every direction. It’s like a man-machine made digital dome yawning over all of Hollywood.

It’s both dark and bright at once. A similar visual effect happens in Manhattan when the light pollution bounces off overcast clouds. In New York the Atlantic Ocean winds shred the clouds into strips and puddles. In Los Angeles the gray blanket hangs incessantly throughout the night, a reflection of both Hollywood’s bright shining possibilities and it’s whirlpools of fatal darkness.

I sauntered under the marquee of the El Rey and made my way inside, cobalt blue wristband certified. The Investigative Journalist in me decided to use the Voice Memo phone function to drift around and ask random strangers; “Why do you like Sky?”

Thank you very much to all the friendly faces who gave these thoughtful quotes. Ages range from 18 – 50, with a mode of 18, median of 29 and a mean average age of 31.

“Why do I like her music? I think she is edgy and I think she is um, very real, and she’s not a pop princess. She’s Pop, but it’s real, legitimate songwriting and singing and she has very real talent and she puts it all out, she lays it all out. I mean if you watch her performances, she cries on stage. This is not um, someone ‘Selling Out’, this is someone who is working. And this is someone who is selling their Art, and showing it, and that’s what’s important, I mean, I think that’s what matters.” – FRANKIE

“I think she’s really just fun to listen to, she has great lyrics, and I think it’s really cool how she started so young, and she’s becoming so big, and not only is she such an amazing artist, she has such a cool lifestyle that she lives and her style in general is just really cool.” – MARIA

“Yeah I’ve kind of been following her whole evolution since you know she first started releasing music a few years ago, so it’s exciting to be at her album release party and get to see a final product. Um, I don’t know, it’s just exciting, it’s personal.”

“It’s hard to say because all of it’s been so different since the beginning but I think all of it kind of has, dark undertones I kind of relate to, so even with the poppier stuff like it’s just relatable, for me.” -TONY

“I just think she has a lot of soul, when she sings and uh, I don’t know I just like the music. It’s very, for me it feels old but very new and very modern, so I relate to that I guess.” – JUAN

“I think Sky overall is just such a cool person. Her style, everything about her is just really cool and you want to get to know her. Her music is upbeat but it’s also real, it’s not fake. With Pop music a lot of times it’s like ‘This is so generic’ but she has stuff that you don’t hear everyday.” – MARENA

“I’ve know her since she was 13, and she writes all her own songs, most of her own songs, so you know.. I’ve followed her career, and she’s got a voice and she has a good sound.” – CARL

The crowd starts screaming as the curtains rise. The shadowy figures of the band amble across the boards. Sky settles in center stage. The set kicks off with Boys. All her fast numbers evoke this jittery bliss. The music is like fireworks, booming and blasting with glittering colors. Her icy white gold hair is cropped short to the shoulder line. Dark jeans, black jacket and no costume changes. The fog machine effect is fun to watch. Sheena Is A Punk Rocker could be one of the songs on the soundtrack of SKY: The Movie.

You’re Not The One. Bloggers keep repeating each other trying to describe how perfect this track is. I remember playing an early live version of You’re Not The One over and over on a loop so much I was concerned my neighbor might cut my door down with an axe. It would have been worth it. The bass guitar line alone is priceless.

I love losing myself, talking to myself in the dark…

Heavy Metal Heart. A whirlwind hurricane orchestrated by a bent-synth soft-grunge siren. If I was a psychiatrist I would play this for my patients and let them go wild and smash things in my office. They would be cured of all their problems. This thunderbolt was built to rock stadiums and arenas. Bet on it. Don’t underestimate this song. Stadium Anthem.

It’s slipping away, there’s nothing we can do…

24 Hours. Pure unfiltered Pop Magic. Singer-songwriters and bands of the world; want to learn how to write an insanely catchy melody? Study this one. Ascension. Add in a fog machine at full blast and a sci-fi laser light show and you’ll have hundreds of people going absolutely bat-shit bonkers. Fact.

How could you know what it feels like to fight the hounds of Hell?

I Blame Myself. A phoenix rising from the ashes. This is your headphone audio exorcism. It does take many years of practice to craft tunes like this. Dreamers, keep practicing. This is how the chorus and crescendo are supposed to sound.

ca·thar·sis noun \kə-ˈthär-səs\: the act or process of releasing a strong emotion (such as pity or fear) especially by expressing it in an art form.

Everything Is Embarrassing makes an appearance later in the set and the audience shrieks like it’s a last-minute touchdown. This Big Hit doesn’t define or limit her in any way. She’s already pushing further and farther beyond. Still, it’s a Neo-classic.

My somber wish In Memoriam was granted when the opening chords of Sunday Morning by Lou Reed rang out. It’s the first track from The Velvet Underground & Nico album and yes it was a Sunday morning when Lou moved on. Ask and you shall receive. Strands and branches of infinity twirling out above us…

Omanko. I can’t explain exactly Why? but Omanko is devastatingly excellent and maybe as good or better than anything I’ve heard all year. I don’t even want to try to analyze it. I don’t need to, just go listen to it and you’ll get it. Top Five contender for Best Songs of 2013. Early call for my favorite off the new album, tied with Heavy Metal Heart.

I won’t forget the time Sky started sobbing in the middle of Sad Dream at the Bootleg Theater show of early 2013. It’s never pleasant to see someone cry. You always hope they don’t, that they battle on and keep it together. It’s awkward for everyone. You’re thinking; “Hmm. How do I react to this? I don’t like this feeling! Sad confusion?” They’re probably thinking; “I’m crying in front of all these people staring at me.”

It was the second verse or so of Sad Dream and Sky was crying, holding the microphone away and turning from the crowd. Her bandmates looked worried. Fans started cheering and clapping, urging her on to continue. She offered some anxious apologies. The crowd showered encouragement at her. The band kicked back in and she belted out the rest of the song with tangible slow-burning anguish.

I’ve enjoyed hundreds of memorable shows from the tiniest dank clubs to the biggest outdoor arenas. I can’t recall any similar feeling comparable to that moment at the Bootleg. You root for her because she’s tough and she must have gone through some serious shit to get that way.

He was of a different generation and gender but the actor James Dean had the same quality. When you watch James Dean on film, its vividly clear that he’s gone beyond the surface of acting. He is diving into the well of his own most brutal life experiences and excavating the pain and anger to find the flowers and gems of redemption.

Right here, right now, Sky is The Best. You’re welcome to disagree, but you’ll really be missing out on some phenomenal music. Go buy the album and just enjoy how fun and cathartic it is. Welcome to 2000-Now and welcome to New Pop. NEO Pop. Try NOT over-thinking so much and embrace it like the ambient synths embrace the diamond-cut electric guitars. Years from now Night Time, My Time will be praised as an iconic musical moment from the second decade of the new millennium. 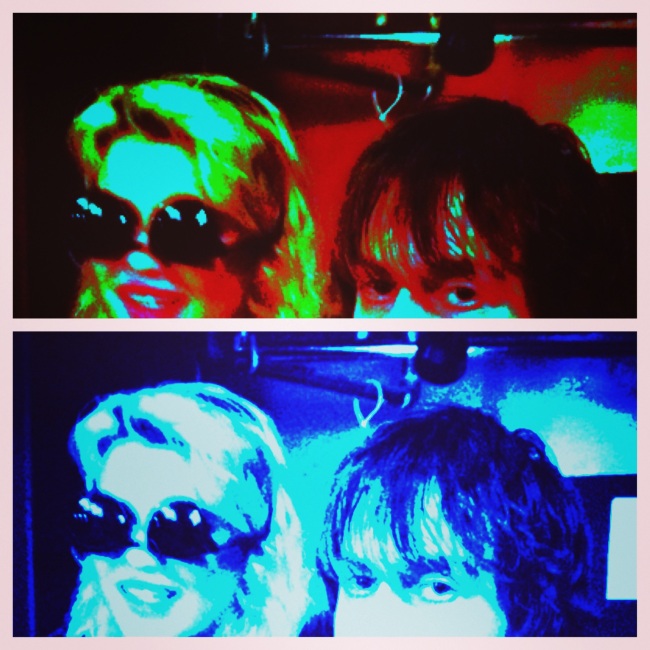 Night Time, My Time is available on iTunes.

1 thought on “THE NIGHT SKY”